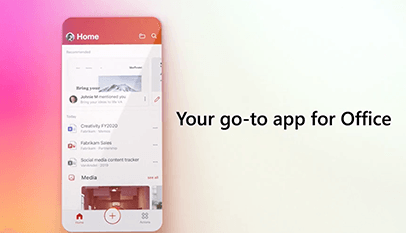 A few months ago, Microsoft introduced a new app called Office. A whole new experience combining Word, Excel and PowerPoint into a single app. With new capabilities that allow you to create content and achieve more, wherever you are. Microsoft released the Office app to the general public in late February.

Millions of people use Microsoft Office everyday at home, work and school. However almost all of this work is done on home computers and very little is done on their phones. Microsoft recognised this and as a result the new Office app was created, changing perceptions of how you could work on a mobile phone.

Key benefits of the Office App include:

Microsoft isn’t stopping there either, over the next 3 months they will be rolling out new features.

Turn your voice into written text and use voice commands to apply formatting and punctuation.

View and edit data in an Excel table row in a simple, digestible card format so you don’t have span across columns that extend beyond the limits of the screen.

Write your presentation content as a simple outline and let PowerPoint Designer turn it into presentable slides.